Studies suggest that feline idiopathic cystitis results from complex interactions involving the bladder, nervous system, and adrenal glands and that husbandry practices and a cat’s environment influence these interactions.

Describes signs of abnormal or irritative voiding behavior associated with absent or minimal cellular inflammation in the lower urinary tract. This type of inflammation is called neurogenic and is characterized by vasodilatation, edema, vascular leakage, diapedesis of red blood cells, but minimal inflammatory cellular infiltration.

FIC is a diagnosis of exclusion made after ruling out urolithiasis, bacterial urinary infection, anatomic abnormalities, behavioral disturbances, and neoplasia.

The disease process is multifactorial and involves interactions among the bladder, other organs (e.g., adrenal glands), the central nervous system (CNS), husbandry practices, and the environment.

It can be an acute or chronic condition.

The pathophysiology of chronic FIC is not completely understood, but appears to involve abnormalities in many body systems including the bladder, nervous system, hypothalamicpituitary-adrenal (HPA) axis, and possibly other body systems.

Histopathologic lesions in the bladder of affected cats are nonspecific (Figure 10-1).

1. Urothelium may be damaged or intact;

6. Minor increases in numbers of lymphocytes and plasma cells in the submucosa;

7. Neutrophilic infiltration is not common;

In a normal bladder, GAG (specifically GP-51) contributes to the mucous layer that coats the intact urothelium and provides a barrier that inhibits bacterial attachment and repels noxious substances in urine, thus preventing urothelial damage.

Chronic FIC is characterized by a decrease in urinary GAG excretion.

Decreases in the urothelial GAG layer may lead to an increase in bladder permeability allowing noxious substances in urine to permeate the bladder wall, causing tissue irritation and activation of the nervous system.

C-fiber sensory neurons in the bladder are more sensitive in cats with FIC than in normal cats and contribute to altered activation of neural pathways.

Altered activity in the locus coeruleus (LC), Barrington’s nucleus, and the paraventricular nucleus of the hypothalamus increase sympathetic outflow.

The LC is the most important source of norepinephrine in the feline CNS.

Chronic activation of this pathway increases levels of tyrosine hydroxylase (TH), the rate-limiting enzyme for the synthesis of catecholamines, in the LC.

Increases in TH contribute to increases in norepinephrine in cerebrospinal fluid and nervous tissue, bladder and colon, plasma, and urine in cats with FIC.

Stress, inflammation, and bladder pain are key components of FIC that are integrated at the level of the sympathetic nervous system.

They activate the sympathetic nervous system.

Even in healthy animals, stress activates the sympathetic nervous system, which may initiate and perpetuate inflammation.

Norepinephrine contributes to vigilance, arousal, analgesia, and visceral responses to stress in cats.

1. Increased sympathetic nervous system activity promotes release of inflammatory mediators throughout the body, and these mediators are linked with pain that is not limited to the bladder. Norepinephrine also initiates the release of prostaglandins; 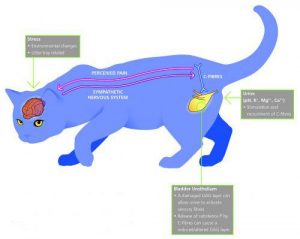 Increased concentrations of corticotropic-releasing factor and ACTH and an impaired cortisol response have been identified during periods of stress in cats with FIC.

Decreased adrenal corticosteroid production may be involved in the pathogenesis of FIC.

Glucocorticoid therapy does not provide any long-term benefit to cats with FIC, indicating that inadequate production of other adrenal steroids may play a role in the pathophysiology.

Only cortisol has been studied thus far.

Decreased adrenal gland volume per kilogram of body weight was found in cats with FIC compared with healthy cats.

No histologic abnormalities were identified in the adrenal glands of FIC cats.

A typical cat with idiopathic cystitis is 1 to 10 years old, lives indoors with people, uses a litter box, and consumes 75% or more of its diet in dry food. The cat may be unusually nervous or needy, overreactive to its environment, and often suffers from other medical conditions, such as obesity or upper and lower gastrointestinal, respiratory, and skin problems.

Current evidence suggests that some cases of idiopathic cystitis represent a systemic disorder variably affecting the bladder and other organ systems rather than a primary bladder disease. Idiopathic cystitis may account for clinical signs related to the urinary system of irritative voiding (dysuria, stranguria, pollakiuria, gross hematuria, periuria) in up to 70% of cats that are less than 10 years old. In contrast, only about 5% of cats older than 10 years with such signs have idiopathic cystitis—instead, more than half of the cats in this age group have bacterial urinary tract infections with or without urolithiasis.

Urinalysis in affected cats may reveal hematuria, proteinuria, crystalluria (which is likely secondary to sterile neurogenic inflammation that leads to proteinuria and increases urine pH so that struvite crystals precipitate), and high specific gravity. In cats with lower urinary tract signs and a urine specific gravity < 1.025, investigate a systemic problem such as renal disease, diabetes mellitus, or hyperthyroidism. 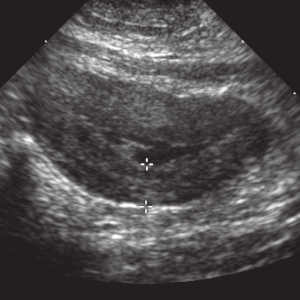 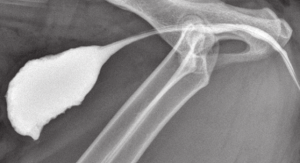 Increased noradrenergic outflow (catecholamine secretion) in response to activation of the stress response system may increase epithelial permeability and activate local neurogenic inflammation in the bladder and elsewhere. Thus, it is crucial to decrease noradrenergic outflow by identifying and reducing factors that may contribute to a cat’s stress and epithelial compromise, such as living indoors with people, poor welfare, and inferior husbandry. In addition, providing systemic analgesia helps break the bladder pain-inflammation cycle.

Clinical signs of a first or a recurrent episode of idiopathic cystitis usually resolve in about 85% of affected cats within a week with or without treatment, but about 50% of cats have another episode within a year. The signs of idiopathic cystitis are distressing to owners, and irritative voiding is presumably stressful for affected cats. Thus, we recommend the following treatment regimen.

We treat the distress and pain associated with acute flares of idiopathic cystitis with acepromazine and buprenorphine. The injectable form of acepromazine may be given orally (2.5 mg b.i.d. to t.i.d.), although some cats will exhibit hypersalivation. In these cats, the oral form may be used—1/4 of a 10-mg tablet in a Greenies Pill Pocket (Nutro Products) or made up as a suspension and administered with an oral syringe. The injectable form of buprenorphine is given orally at 5 to 20 µg/kg two to four times a day for three to five days—buprenorphine is absorbed across the buccal mucosa.

We also recommend enriching the environment of indoor cats, because captivity and housing with people and other cats or other environmental challenges may elicit stress responses in some cats. Although extensive indoor housing in an unenriched environment doesn’t cause idiopathic cystitis, it may contribute to its development and ongoing occurrence. We have found that about 80% of cats with recurrent idiopathic cystitis respond to successful implementation of environmental modification.

Environmental modification is an important aspect of treatment.4,5 The litter box must be a clean, acceptable, and accessible place to encourage the cat to eliminate normally. Anything that hampers litter box use may increase the time the cat retains urine between eliminations. Prolonged exposure of the bladder wall to urine in cats with increased bladder wall permeability may increase access of “toxins” (e.g. acid, potassium, nitrogenous wastes) to suburothelial structures, which also may activate local inflammatory mechanisms. Litter box design, numbers, locations, obstacles, and cleaning schedules as well as litter type all influence a cat’s litter box usage and should be discussed with clients.

Decreasing the cat’s urine specific gravity below 1.030 is a treatment target and can be attempted by switching from dry to canned food or adding water to dry or semi-moist diet formulations, as long as the diet change or new diet is not aversive to the client or the cat. Owners also can encourage these cats to drink more water from their cats’ preferred water sources such as a fresh-dispense bowl or even a running faucet in the sink, or by adding meat or fish-flavored ice cubes to their water if they like that. Acidifying the urine to minimize struvite crystalluria is usually not indicated. 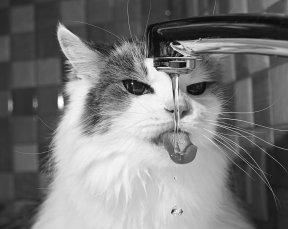 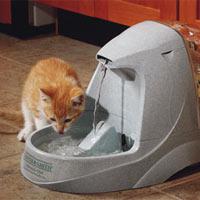 Conflict between cats or other animals in the household or threats from outdoor cats can be a source of stress, so talk with owners about providing separate resources that each cat can use without interference from other animals.

Providing opportunities for owner-cat interaction and activity such as playing with toys that mimic prey motion or that intermittently release food are helpful. Methods to increase indoor space that the cat uses include providing vertical and horizontal scratching surfaces as well as objects to climb and areas in which to hide, perch, look outside, and rest undisturbed.

Based on our clinical experience, we also encourage owners to use synthetic feline facial pheromone products to augment other enrichment efforts. Feliway (Ceva Santé Animale) can be sprayed in the affected area of the environment or dispersed into larger areas by using an electric diffuser.

We sometimes prescribe amitriptyline (5 to 12.5 mg/cat orally once a day, always using the lowest possible dose) or another tricyclic antidepressant when environmental modifications as described above have not sufficiently reduced the cat’s clinical signs. We taper the dose gradually and stop it whenever possible after at least three months of use, and we use the drug cautiously if at all in cats with heart disease. We also perform a complete blood count and serum chemistry profile to monitor the platelet and white blood cell counts and liver enzyme activities before and at one, three, and six months during therapy.

Additional medical therapy may include increasing the dose of buprenorphine. Unfortunately, glucosamine6 and pentosan polysulfate7 have been found to be ineffective therapy for feline idiopathic cystitis.

If a cat’s clinical signs do not resolve or if the signs recur, you can perform additional diagnostic evaluation (repeat the complete blood count, serum chemistry profile, and urinalysis, and consider performing or referring the cat for cystoscopic evaluation) to rule out problems other than idiopathic cystitis.

Controlled clinical trials may provide additional information about the best approach to managing cats with idiopathic cystitis, but in the interim we have had success with the aforementioned environmental and medical management procedures.